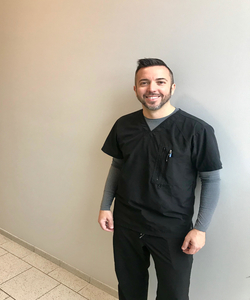 Dr. Pulley hails from Michigan and moved to the great state of Iowa to attend ISU. He graduated with a degree in Zoology and proceeded to Davenport to pursue his education and career at Palmer College of Chiropractic. After graduating with honors in research, Dr. Pulley and his family relocated to Des Moines to set down roots and open a practice in the East Village. His office opened in 2004 and has been very successful.

While in Des Moines, Dr. Pulley opened two additional chiropractic offices in small towns as well as hiring 4 chiropractors to help his practices grow. He has also pursued other business interests. He served on the board for a start up recycled building materials manufacturing venture called ReWall. Dr. Pulley taught at William Penn University for 6 years teaching in the associates, bachelors, and masters program.

Civic Involvement is a key aspect of Dr. Pulley’s business strategy as well as personal philosophy. He has served in several capacities, often leadership positions, on over 16 different non profit boards. These include a variety of areas; childhood cancer, workforce development, neighborhood organizations, as well as others. Both Governor Vilsack, and Governor Branstad of Iowa selected him to take part in a workforce governmental organization.

Dr. Pulley has received several awards while in practice. His business was voted best chiropractic office in the Greater Des Moines region 6 years in a row. East Village Chiropractic was awarded Business of the Year by the East/South Chamber of Commerce. Dr. Pulley was named a Des Moines Business Record Top 40 under 40. He was awarded an excellence in teaching award his first year of teaching.